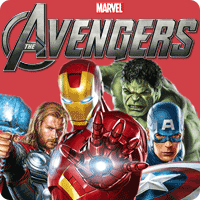 Avengers Assemble! The earth's mightiest heroes come together to battle the foes no single superhero can withstand. The first Avengers team was formed in 1963 with the release of the Marvel Comics comic book, which followed with the animated television series and The Avengers and Avengers: Age of Ultron films. The unbeatable team of superheroes has featured Hulk, Iron Man, Thor, Captain America, Hawkeye, Black Widow and more. Explore the mighty superhero world of toys, bedding and merchandise available at Funstra now.
View as Grid List