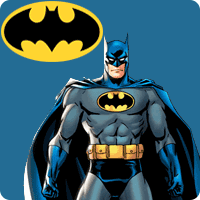 Batman is the Dark Knight that protects Gotham City and its citizens from evil. The secret identity of the Caped Crusader is Bruce Wayne, who unlike most superheroes doesn't possess superpowers, but battles evil with his genius intellect, physical prowess, martial arts abilities, detective skills, technology and wealth. The DC Comics crusader against crime has entertained fans in comic books, television series and many films with many memorable supporting characters, namely Robin, Batgirl, Catwoman, Bane and the Joker. Explore the dark superhero world of toys, bedding and merchandise at Funstra now.
View as Grid List